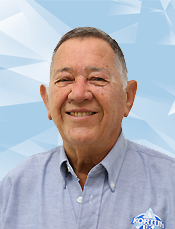 In the eighteenth century Kortijn belonged to the shipmaster Elias Courtin (there from the name Kortijn). For centuries the estate Kortijn, with showing the manor at the Kortijnweg was in the possession of the family Van der Meulen, who were owners of the wharf in Otrobanda.

At the beginning of the twentieth century Shon Janchi (Jan Ernst) van der Meulen was the owner and occupant of the manor. Shon Wichi (Sr. Herman Willem) van der Meulen, a brother of Shon Janchi, was a self-made refrigeration mechanic and installed in 1933 an ice manufacturing factory at Kortijnweg 48. Huge ice bars were delivered to ships and supermarkets, as well as smaller chunks of ice to citizens who had a wooden insulated ‘refrigerator’.

In July 1978, the factory and manor where sold to Edwin Moor Aline Kadir Ally from Guyana and his wife, the Portuguese Maria Rodriguez. Mr. Kadir Ally and his wife Maria manage both the Ice Factory and the Bottling Company up to 2000.

With encouragement of Ms. Maria, Mr. William Thomas Rozier bought the factory in 2001.

Since then the Plant has been managed successfully by the Rozier’s Family.

The old ice factory Kortijnweg 48 of Wichi van der Meulen and Benny Prince and later Edwin Kadir Ally, was restored in 2002 to a state of the art Ice Factory.

Kortijn Ijs goes beyond providing high quality ice; they have been reliable through centuries in keeping the longest holding ice on the island. Reliability, flexibility and innovative creativity play an equal and important role for the best ice in town.